Reisha Perlmutter was born and raised in Naples, Fl. She relates her work directly to her experiences of light and nature from childhood, and her relationship growing up around the presence of water.

Since childhood, Perlmutter has found her internal language and understanding of the world through creating, and through art. Images of the natural world, painted themselves onto her psyche. Memories of the silver Gulf of Mexico gleaming after a summer downpour continue to speak to her work, especially in her newest series AQUA.

Perlmutter studied at Bates College in Maine to expand her greater thought process and language. However, after two years, she was ready to devote herself entirely to her art. 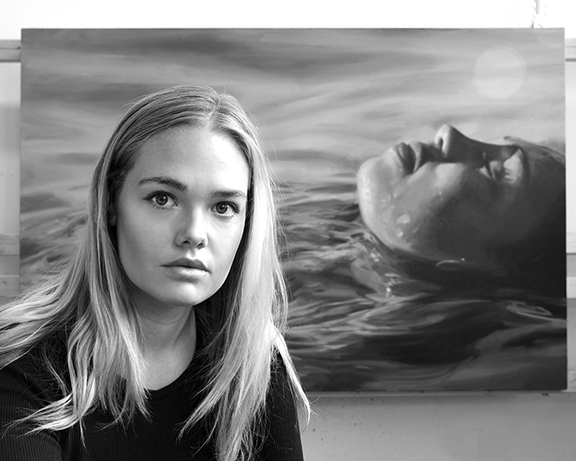 Perlmutter transferred to the School of the Art Institute of Chicago, where she received her Bachelor of Fine Arts with a concentration in Painting. During her studies at the Art Institute, she attended a residency in Umbria, Italy, where she said her, “love and fascination with the presence of light was reawakened. I watched as the light’s golden aura would play upon the hillsides and along the façades of the medieval buildings in the small town.”

During the time between her undergraduate and graduate degrees, Perlmutter studied classical French atelier painting and drawing at Studio Escalier in Paris and in the Loire Valley.

Perlmutter received her Master of Fine Arts from the New York Academy of Art, where she focused on figurative painting and anatomy.

Shortly after receiving her MFA degree, she moved back to Florida, in search of reuniting herself with soil, nature, and its enchantment. It was her move back to Florida that inspired her newest series, AQUA. Perlmutter describes this series as jumping board back into the magic of her childhood, and her intimate memories with light, water, and its sensation.

“AQUA is about merging time, about memories becoming present experience. It is about weightlessness, and our deep connection to our senses beyond the confines of thought or intellect. It is about feeling, about oneness, and being.  Light is critical to these works. It is metaphorical of course in terms of internal illumination, but also directly necessary in evoking sensation and beauty through its presence and inherent complexity.  The imagery of this series uses light as its life force. Light and its transience is captured in the moment of a painting’ existence, and held. It abstracts the idea of time.”  – Reisha Perlmutter